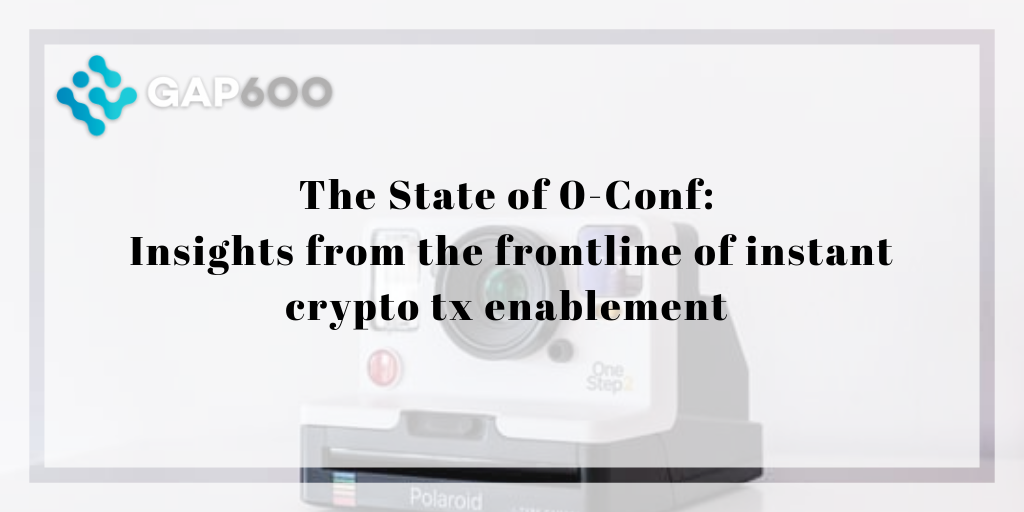 This is the first in a two-part blog series in which GAP600 takes an in-depth look and shares insights into the state of 0-conf and instant deposits in the cryptocurrency and Bitcoin space.

Modern consumers and businesses demand instant, real-time transactions (tx) across payments and deposits, making it the new normal for both fiat and crypto financial services providers.

Consumers demand speed and convenience for seamless and frictionless customer experiences (CX), while businesses and merchants want transfer and payment transactions to reflect in their accounts immediately to improve cash flow and boost operating capital availability.

In response, tx enablement with fiat currency and traditional payment methods has advanced at pace as a wave of fintech innovation disrupted the market and forced incumbent financial services providers to respond. 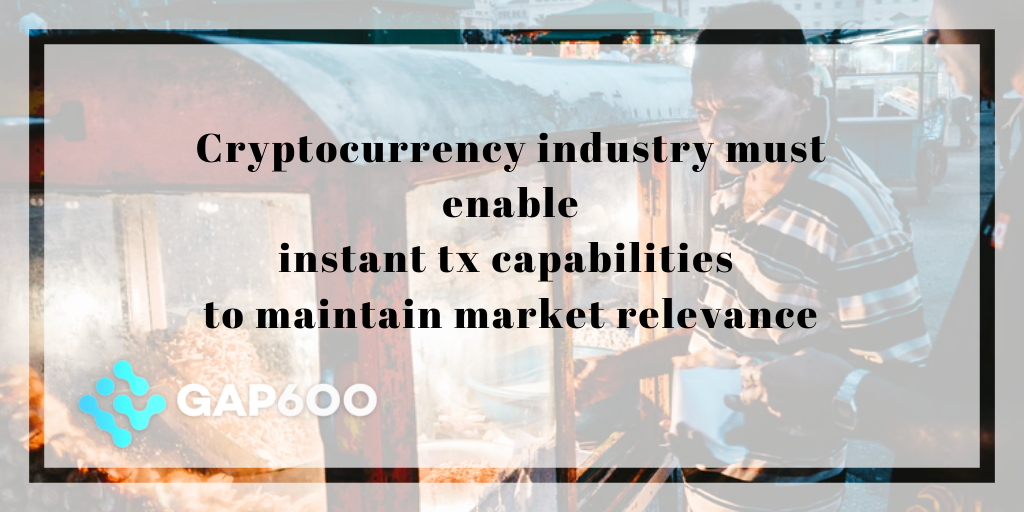 A world of fiat

The need to keep pace with these developments has amplified the urgency with which the cryptocurrency industry must enable instant tx capabilities to maintain market relevance.

Decentralized, non-censorable cryptocurrencies have no inflationary effect and enable low transaction fees, which offer distinct improvements over fiat currency. However, if the crypto CX across the spectrum of financial transactions is not orders of magnitude better than fiat, adoption and usage will not scale.

And safe, secure 0-conf tx enablement is the foundation on which the industry must build cryptocurrency’s instant tx value proposition because anything less is more of the same when compared to fiat options. 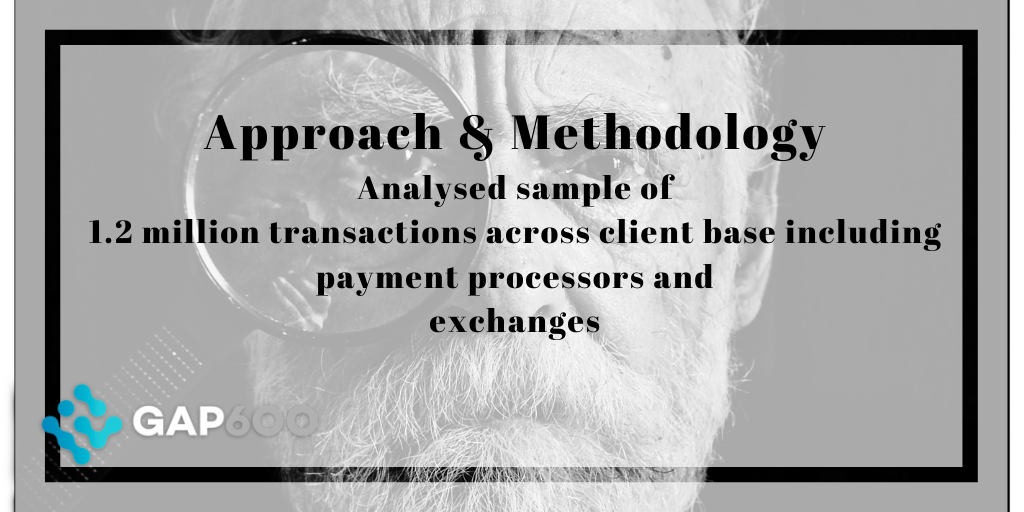 Thankfully, it is achievable to perform safe and secure 0-conf transactions by following basic guidelines. GAP600 mitigates 0-conf transaction risk with a proprietary risk engine that analyses and performs live risk scoring for each transaction as it reaches the mempool.

This is achieved by analysing a transaction’s static information, weighted more heavily towards the fee weight or size ratio and the input characteristics. The solution also looks at historical tx and ancestral aspects, as well as its propogation on the network to determine how it was transported.

GAP600 uses this data to assess conflicts and test against thresholds with probabilistic models to confirm or reject the transaction.

This enables us to guarantee cryptocurrency payments before they reach the blockchain, which enables exchanges, payment services providers, and other operators and merchants that accept cryptocurrency to recognise unconfirmed BSV, BTC, BCH and ETH transactions as final.

This solution is revolutionising the speed of cryptocurrency transactions and adds significant value to a range of commercial environments by enabling instant, risk-mitigated cryptocurrency commerce that is safe and secure, yet still offers a simple, more efficient user experience.

The company currently confirms over 400,000 transactions a month, saving customers over 28 minutes on average in transaction time.

So how effective is this approach? And how safe are 0-conf transactions?

The state of 0-conf

In our first quarterly State of 0-Conf report, we have analysed transactions that were processed and guaranteed on the GAP600 platform, or rejected based on the system’s risk analysis, to deliver insights and industry-related statistics. We have looked primarily at BTC transactions because Bitcoin BTC is still the dominant coin used for monetary transactions. 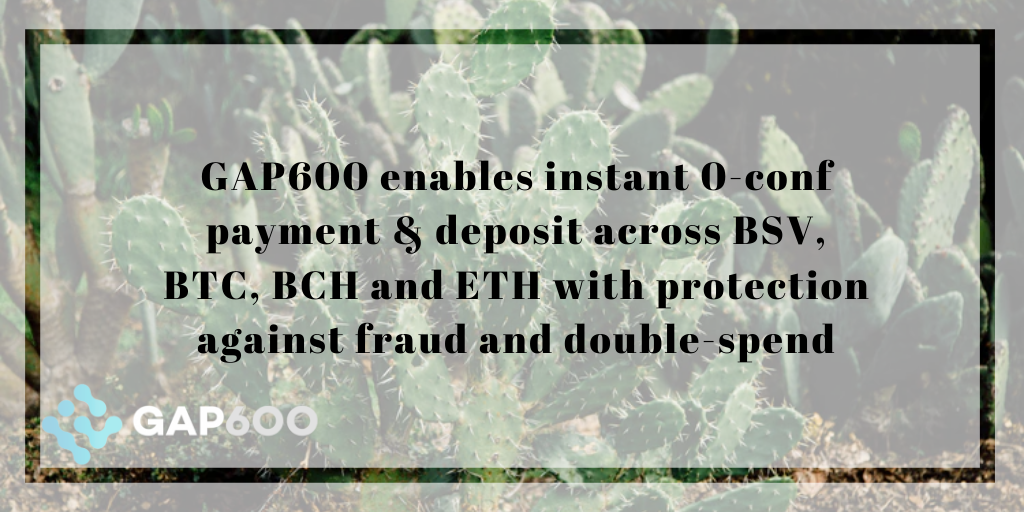 It is difficult to differentiate all transactions on a blockchain based on their end-use. Therefore, we have focused on transactions that we know were for exchange, teller, and payment processing services to analyse a more accurate data sample.

We analysed a sample of 1.2 million transactions across our client base, which includes payment processors and exchanges, which produced the following statistics:

+/- 0.1% of transactions GAP600 processed failed to reach the blockchain. This figure has generally remained constant throughout our operational experience in the industry. These represent transactions which in essence were fraud attempts and were initially published as desired transactions but failed essentially at realizing the double-spent attempt.

While this statistic may appear to be minimal and insignificant, all businesses operating in the crypto space have a low tolerance to fraud. In addition, when a vulnerability is discovered, it is heavily exploited. As such, proactive prevention is vital. Actual double-spend numbers would be much higher if there were no mitigation measures in place.

To contextualise this figure, it is important to understand the transaction process. Every new Bitcoin tx comprises previous transactions, which creates a chain link. The GAP600 system performs a backward analysis of these chain links to identify potentially suspicious transaction ancestors or inputs that could indicate an attempted fraudulent double-spend attempt.

Another interesting statistic based on historical analyses performed by the GAP600 system indicates that only 1.5% of transactions had transaction ancestors or inputs that were too suspicious to confirm instantly.

While suspicion does not necessarily imply a nefarious purpose, the presence of these factors places numerous transactions outside GAP600’s parameters. They are, therefore, considered too high risk to guarantee.

The time we save on the platform varies according to stress periods on the network. For instance, significant backlogs still occur periodically on the BTC network. On average, it took 15 minutes for transactions from the sample set to be included in a block and be considered as almost final.

A simple solution is just to wait the equivalent of 3-6 confirmations on the BTC network, but this obviously degrades the experience and fails to meet the demand for instant transactions.

As previously stated, GAP600’s experience indicates 1.5% of transactions include ancestors or inputs that are too suspicious to confirm, but not every suspicious input indicates a double-spend attempt.

In addition, the sensitivity around money, especially digital money, necessitates that responsible services providers mitigate risk wherever possible. This ensures that they generally have clear control of their revenue streams, especially when offering this as a commercial service.

GAP600 has in the past guaranteed 0-conf transactions which failed to reach the blockchain. In each case, we perform a rigorous analysis to determine the causes and implement changes on a granular level to ensure we don’t experience them again. 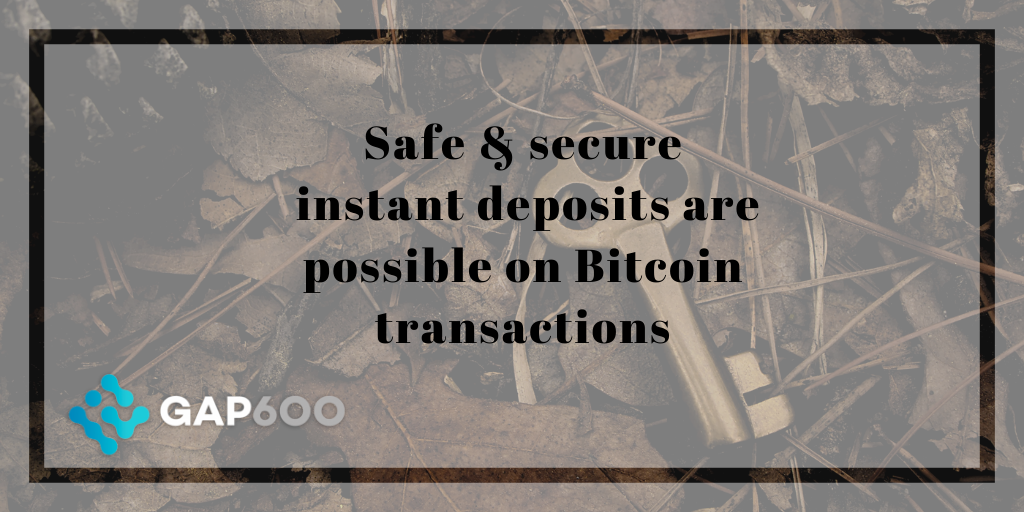 Our statistics reveal that fee/size or fee/weight requirements increase in relation to countering the risk of attempted double-spend. A transaction with a reasonable fee relative to current stress in the network and with nothing out of ordinary involved in the transaction, should be able to benefit from instant deposit recognition.

Despite the perceived prevalence and risk of double-spend on Bitcoin transactions, safe and secure instant deposits are possible using a solution like GAP600. In future articles, we will explain how the main Bitcoin versions –  BTC, BCH and BSV – each approach instant transaction experience enablement on a protocol level.

And while the real risk is low, it is vital that the industry adopts best practices in mitigating double-spend attempts to discourage increased exploitation of any vulnerabilities.

The GAP600 model is designed to be as accurate as possible. We run a significant network of node clusters and do a great deal of analysis to avoid any amount of fraud, no matter how small. By rejecting transactions based on specific thresholds, we effectively mitigate opportunities to exploit vulnerabilities.